Question: I have been meditating for many years, and I have had a lot of benefits from it, but now I seem to have reached a point where there doesn´t seem to happen anything further. I can´t stop my thoughts, they keep on repeating the same themes. How can I progress further?

In meditation circles today there is a tendency to claim that meditation is to be without thoughts, and that thoughts generally are an illness which should be avoided, or deconstructed through contradictions and trickery. Arthur Versluis calls this tendency immediatism. It is a direction that wants the fruits of meditation, but not the obligation. It doesn´t want to do the traditional preparatory work.

Meditation as an Art of Life belongs to an ancient Western tradition, where preparatory work is quite central. This preparatory work is simply called philosophy. Philosophy should here be understood as what the word means: love of wisdom. To philosophize meant to practice certain spiritual exercises in order to transform oneself, and become one with the source of wisdom. All philosophical schools in the Greco-Roman period were about this. In this they are similar to the philosophical schools in the East. I recommend to follow the tradition which you are closest related to.

In antiquity, a philosopher was a person who was in love with wisdom and who had devoted his whole life to spiritual exercises aiming at unification with the One. And, as a quite central part of these exercises, was thought training.

So, what is thinking? When you look at your thoughts you see a stream of memories, inner monologues, sensations, moods, comments, associations, imaginations, arrangements, plans and projects. What generally makes thinking a problem, is negative automatic thinking. The thought for example says: ”everything is my fault”, ”I can never do anything right”, ”nobody likes me”, ”I am alone”, ”I am stupid”, ”the world is evil”, ”everyone are idiots”, etc., etc.  Such thoughts leave a feeling of constant depression, a dark psychological bubble. In our modern world this is a very common existential mode. 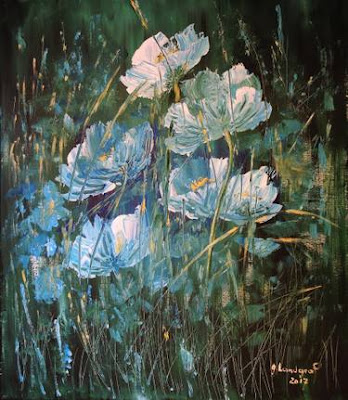 So, when specific negative feelings keep on coming back, regardless what you do, then it is necessary, that you begin to observe these feelings in order to change and restructure the thought-pattern in them, which causes, that you can´t progress.

The triggering situation, or challenge, is always something completely new, but it activates the past´s inappropriate assumptions and rules of living, which you tighten together with the challenge (as for example ”I am something special” -  ”unless I always am perfect in every situation, then I am a fiasco”).

In other words, the problem arises when you react from your past and future; that is: through evaluations. You compare with earlier and hope, desire or fear something else. In this way the inappropriate assumptions and rules of living are activated. And then have you the problem, the negative automatic thought.

The automatic thought again activates the painbody, and then you have all the negative feelings and inappropriate actions. The painbody consists of a number of reactions in your body, your feelings, your motivation and behaviour, which altogether form a vicious circle; that is: something which make you repeat the same inappropriate actions again and again. You have formed yourself a zombie like lifestyle.

Thought training is to activate more realistic, appropriate and flexible ways of thinking.

Behind the painbody lies a determinate negative thought-pattern, which reflects itself in the body in the form of a negative energyfield. Be in this connection aware, that this thought-pattern´s various inappropriate basic assumptions, rules of living, thought-distortions, negative automatic thoughts, values, ideals and conceptions, mostly work unconscious in you. It contain not only personal images, but also collective images, and reaches down in the history of man, into original sin and negative karma. You can´t dissolve this through therapy. Only a help from the Source, the One, can basically help you. So, you need to have a metaphysics, or a religion, in order to create a direction in your thoughts.

Moreover, you need to be a lover of wisdom, if you want to go deeper into this. You need the passion, or else you won´t progress. Ancient Greece was famous for its charlatans, the so-called sophists, who performed as philosophers, but who wasn´t in love with wisdom. They just wanted to use the title as a way of earning money and attaining awareness. Real philosophers never took any fee.

As a beginning of your thought training you can use my supporting exercise The Relaxationmeditation. In ancient Greece the relaxationmeditation is known as incubation. Incubation is very simply the art of lying down and relaxing. It was used in temples for healing. People slept in temples in order to receive a dream from the Gods which could tell the Priest, about the illness and its cure. But it was also a meditation practice aimed at being united with the divine. The keyword was simply stillness (Hesychia). And stillness is meditation. Philosophers, like Parmenides, was lying down in caves for several days, in order to get in touch with his Goddess.

To go into stillness is a kind of death. Plato, for example, had defined philosophy as an exercise for death, understood as the separation of the soul from the body. For Epicurus this exercise for death takes on a new meaning; it becomes the consciousness of the finitude of existence that gives an infinite value to each instant: “Persuade yourself that every new day that dawns will be your last one. And then you will receive each unhoped for hour with gratitude.” In the perspective of Stoicism, the exercise for death takes on a different character, it invites immediate conversion and makes inner freedom possible: “let death be before your eyes each day and you will not have any base thoughts and or excessive desires.”

A mosaic at the Roman National Museum is inspired, perhaps ironically, by this meditation, as it depicts a skeleton with a scythe accompanied by the inscription Gnothi seauton, “Know Thyself.” 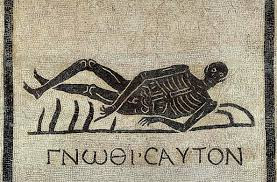 Linked to the meditation upon death, the theme of the value of the present instant plays a fundamental role in all the philosophical schools of antiquity. And, as Algis Uždavinys, suggests, it can be traced to ancient Egyptian wisdom.

Incubation, or dream incubation, is the Western equivalence to Tibetan dream Yoga. This is not far-stretched. In his book A Story Waiting to Pierce You, Peter Kingsley has shown a connection between the Tibetan Bön tradition (wherefrom dream yoga has developed), Mongolian shamanism, and ancient Greece. He has even shown connections to Native American sacred tradition.

So, when you start out with the lying down practice, and the thought training, think of yourself as part of a lineage going back to these ancient practices.

Meditation as an Art of Life – A Basic Reader (free Ebook. In the section “Supporting Exercises” you can find the Relaxationmeditation)

The Classical Greek Practice of Incubation and some Near Eastern Predecessors, by Juliette Harrisson (article)

What is Dream Yoga? (article)