I´m using the Amazon used book market quite a lot. It can be interesting to receive a used book. Someone else has read it, and often it has a smell attached to it, which can bring you to unknown places.


In 2002 I ordered the Selected Poems by the Argentine writer Jorge Luis Borges. When I received it, and scrolled through it, I ended up on the page with the poem: To a Cat:

Mirrors are not more silent
nor the creeping dawn more secretive;
in the moonlight, you are that panther
we catch sight of from afar.
By the inexplicable workings of a divine law,
we look for you in vain;
More remote, even, than the Ganges or the setting sun,
yours is the solitude, yours the secret.
Your haunch allows the lingering
caress of my hand.
You have accepted,
since that long forgotten past,
the love of the distrustful hand.
You belong to another time.
You are lord
of a place bounded like a dream.

I sensed a scent of a perfume I knew very well, but never had smelled anywhere else than in connection with one person. Had Angelina Jenkins also read this book?

It was in London in 1990. I had just finished five, quite extraordinary years, as a gentlemens´ outfitter in the luxurious department store Harrods. 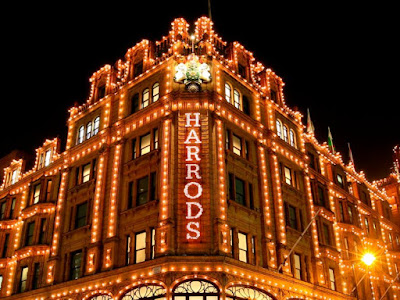 Angelina Jenkins worked in the Perfumery Hall, and sometimes she was standing in a stand in the Men´s department, selling products for men. She had an attractive dark look. Black hair and brown eyes. I frequently stood at the stand, chatting with her. I remember a funny episode when Eddie Murphy came strolling through the department with a group of bodyguards around him. Angelina Jenkins asked him:

“Haven´t I seen you before?”

“Probably, I´m doing a lot of shoplifting here.” He pointed at the men following him. “That´s why these guys keep an eye on me.”

My time in London was a time of daydreaming. I was young, and dreamt about a life that would be different than the normal. In my lunch breaks I often walked over in Kensington Gardens and sat by the Serpentine Lake, a central place in J.M. Barrie´s books about Peter Pan. The story about Peter Pan has always have a special place in my heart. I remember it from the the animated television Christmas special: From All of Us to All of You. The Danish version always showed a clip from the 1953 animated film on Peter Pan. The show has been shown infrequently in the US in recent years, but in the Nordic countries (Sweden, Finland, Denmark, Norway and Iceland) the show has been broadcast every year since 1959, and has become a holiday classic. 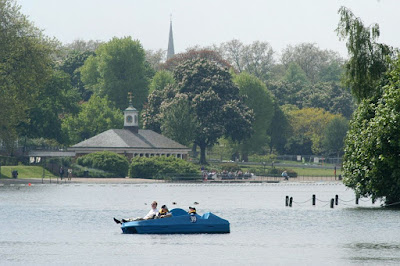 In the same way as Peter Pan, I wanted to escape from the normal life. Many years later I should realize how close to shamanism and Tibetan dream yoga, Peter Pan actually is. In his novel, Peter Pan in Kensington Gardens, J.M. Barrie writes:

If you think he [Peter Pan] was the only baby who ever wanted to escape, it shows how completely you have forgotten your own young days. When David heard this story first he was quite certain that he had never tried to escape, but I told him to think back hard, pressing his hands to his temples, and when he had done this hard, and even harder, he distinctly remembered a youthful desire to return to the tree-tops, and with that memory came others, as that he had lain in bed planning to escape as soon as his mother was asleep, and how she had once caught him half-way up the chimney. All children could have such recollections if they would press their hands hard to their temples, for, having been birds before they were human, they are naturally a little wild during the first few weeks, and very itchy at the shoulders, where their wings used to be. So David tells me (page 20-21).

I frequently invited Angelina Jenkins to follow me to the gardens. We became friends. It was by the Serpentine Lake that my concepts of the philosophical globetrotter, life artist and idler, were formed.

So, in 1990, when I was about to leave England in order to start an adventurous life, I invited Angelina Jenkins to the movies at Leicester Square. A new film by Bernardo Bertolucci, called, The Sheltering Sky, had premiere. The film was starring Debra Winger and John Malkovich. The story centers on Port Moresby and his wife Kit, a married couple originally from New York who travel to the North African desert accompanied by their friend Tunner. The journey, initially an attempt by Port and Kit to resolve their marital difficulties, is quickly fraught by the travelers' ignorance of the dangers that surround them.

The traveling theme, and the dangers, fascinated me.

After England I began my own adventures, but I never forgot Angelina Jenkins. I guess my feelings for her were more than that of a friend. But I don´t know why I never got her address or phone number. And I can´t get it at Harrods. Today she just seems like a mirage.

So, in 2002, when I read Jorge Luis Borges´ poem, To A Cat, and had that scent of her perfume, I decided that I would follow in the “footsteps” of the film.

The film is based on the 1949 novel of the same name by Paul Bowles (who appears in a cameo role). Tennessee Williams wrote a review of the novel in New York Times (December 4, 1949). He wrote:

I suspect that a good many people will read this book and be enthralled by it without once suspecting that it contains a mirror of what is most terrifying and cryptic within the Sahara of moral nihilism, into which the race of man now seems to be wandering blindly.

I was fascinated by it. I my book, A Portrait of a Lifeartist, I have wrote about The Nihilistic Moment in a spiritual practice. It is not nihilism, but a moment where all ideas and images are leaving your mind.

The movie was filmed in Morocco, Algeria, and Niger, and features powerful landscapes. I knew Paul Bowles was living in Tangier, so I travelled to Tangier. I booked myself into the Hôtel Continental, which is located in Tangier's Medina at 36, rue Dar Baroud, where it overlooks the downtown port and the ocean. This historic hotel first opened its doors in 1870. Edward, Prince of Wales, who later became King Edward VII after the death of his mother Queen Victoria, stayed at the hotel in 1888. 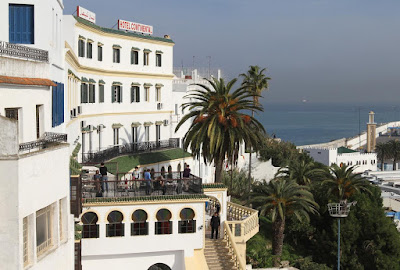 This 19th-century building is classed as a National Heritage site and has Moroccan-style lounges with traditional mosaic tiles. Views of the sea or the Medina feature in all of the rooms at Hotel Continental. Each overlooks the patio and is individually decorated, and some have a private balcony. It is one of those old hotels from the colonial era, with an old decaying beauty.  I thought of the illustrious names of those who stayed here before me: Degas, Delacroix, Matisse, Kerouac.

In his latest in a series of social histories of Tangier's Grand Hotels, who saw their heyday in the late 19th through mid twentieth century, Dr. Terence MacCarthy writes:

"The Continental Hotel, alone in Tangier stands both witness and heiress to that age of soignée aristocratic refinement which, for a half a century, made the White City a very real rival to Monte Carlo and Nice, and a mecca for Princes and Potentates, Lords and loafers, artists and officers, couriters and courtesans.  It is a vanished world, a social Atlantis, drowned in a sea of blood of two World Wars, a civilisation we glimpse in faded sepia photographs…"

I soon became friends with one of the waiters. I can´t remember his name, but he just asked me to call him Jimmy. I told him about the movie and why I had decided to go to Tangier. He was thrilled.

“They lived here” he said. “At this hotel. While they were filming. The whole film crew: Bernardo, John, Debra.”

“Wait”, he said, and disappeared into the reception. He returned with a photo of himself standing beside a smiling John Malkovich, leaning his head against his chest.

“After that movie,” Jimmy said, “John wasn´t able to live in a house anymore. Ever since he has only lived at hotels.”

Jimmy wanted to show me his shop in the medina. “I´m making my own perfumes”, he said. So, I followed him into the labyrinth. 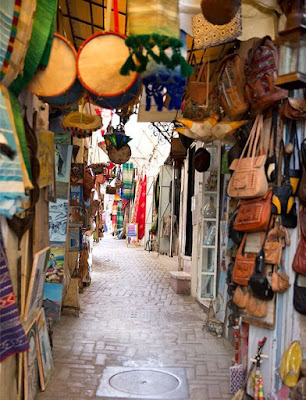 His shop was filled with small bottles with perfumes, supplied with Jimmy´s handwritten labels.

“I have just finished a new perfume”, he said, and found a bottle with a golden liquid inside. “It is made out of a recipe found in the long-lost tomb of Queen Cleopatra. One of my friends got it for me.”

He removed the cork, and held the bottle up to my nose, so that I could smell it.

He said: “This is the perfume Queen Cleopatra carried when she seduced Mark Anthony.”

I got dizzy. This was Angelina Jenkins´ perfume.
Posted by Morten Tolboll at 2:41:00 AM