Is it a Coincidence That the Sensationalistic Interview with Meghan Markle and Prince Harry was Performed by New Age Guru Oprah Winfrey? 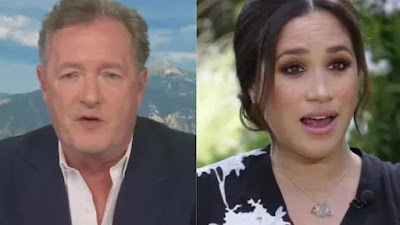 Since I already have written a critical article on the New Age promoter, Oprah Winfrey (A Critique of Oprah Winfrey), it caught my attention when I heard about an interview called “Oprah with Meghan and Harry”. I thought: “Why is it Oprah Winfrey, who are doing this interview?”

“Oprah with Meghan and Harry” is a 2021 television special that was hosted by American media personality Oprah Winfrey. The special, which featured an interview between Winfrey and the Duchess and Duke of Sussex. The special premiered March 7, 2021 on CBS in the United States, and premiered in the United Kingdom the next day on ITV.

Filmed in Santa Barbara County, California, the interview came after Prince Harry and Meghan announced their decision to step down as working members of the British royal family in January 2020. The interview included discussion of their courtship, wedding, their second child's sex (female), mental health struggles including Meghan's suicidal thoughts, and a shared sense of abandonment in terms of emotional and financial support. Moreover, Meghan critiqued the British monarchy as an institution, while they both said one or more comments had been made privately to Harry by an unidentified individual within the royal family in relation to the skin color of their then unborn son, Archie Mountbatten-Windsor. Also discussed was a royal title for Archie, the personal security of the couple, and Harry's estrangement from his father, Prince Charles, and brother, Prince William. Meghan's own relationship with her estranged family was also briefly touched upon.

On the March 8, 2021 edition of ITV's morning show Good Morning Britain after the interview's U.S. airing, anchor Piers Morgan—who was briefly a friend of Meghan before she became the Duchess of Sussex, but claims she cut him off early in her relationship with Prince Harry - disputed the veracity of Meghan's contemplation of suicide, stating "I don't believe a word she says. [...] I wouldn't believe her if she read me a weather report."

Morgan's remarks were met with immediate backlash from viewers and other critics. In response to the backlash, Morgan issued a statement on Twitter on March 10, saying, "On Monday, I said I didn't believe Meghan Markle in her Oprah interview. I've had time to reflect on this opinion, and I still don't. Freedom of speech is a hill I'm happy to die on." He later stated, "I think the damage she's done to the British monarchy and to the Queen at a time when Prince Philip is lying in hospital is enormous and frankly contemptible."

Piers Morgan has hereafter blasted Meghan Markle for 17 “untrue, exaggerated or unprovable” slurs against the Royal Family (see links in the end of this post).

All this made me interested in the philosophies running beneath the thoughts of Meghan Markle (not that I believe she is fully conscious about it). Let me explain.

I have in previous newsletters announced a series of upcoming critical articles. They are still in progress. As usual I describe, and criticize, the philosophies behind concrete appearances, and not so much the appearances in themselves.

In connection with the Meghan´s and Harry´s interview with Oprah Winfrey I, in my newsletter, September-October 2020, announced an article called:

This article will investigate the postmodern intellectualism behind, for example, this pop culture file:

Let´s Celebrate J.K. Rowling for Having the Courage to Speak Up Against the Trans Police

I also claim that postmodernism is the intellectualism behind New Age. See my article:

Constructivism, the Postmodern Intellectualism behind New Age and the Self-help Industry

These articles describe the abstract philosophies running beneath the sensationalistic interview with Meghan Markle and Prince Harry, performed by their neighbor in LA, New Age guru Oprah Winfrey; LA, this straight line desert town without any great ancient culture, without circles and without any circular center (in the end of this post I will post links to further articles, which I will supply with comments).

The whole interview is followed by an enormous American press coverage, where the lies and sensationalism in the interview not is being questioned. Instead Meghan´s allegations is being taken at face value. However, this will not happen in my article, despite that I know the power of the Cancel Culture (which the above-mentioned article on Gender, Race and Identy studies will be about).

What I write here is just a satiric comment seen in connection with my concept of the Godgame. You could say that The Godgame is The Evolutionistic School against The Traditionalist School (where I belong), or, the Anti-realism School against the Philosophical realism Shool (where I belong). Or, in a more ancient context: the Sophists against the Philosophers (for example Socrates, or Plato).

Let me explain the above in a specific American context.

Alfred North Whitehead was a widely influential twentieth century philosopher and mathematician. He is responsible for coining the following celebrated quote about Plato's enduring influence.

The safest general characterization of the European philosophical tradition is that it consists of a series of footnotes to Plato (Process and Reality, p. 39).

In connection with Platonism, it ought to be mentioned, in connection with the sensationalist interview, that there is a distinctively American form of Platonism, fostered by the Concord School of Philosophy. The Concord School of Philosophy was a lyceum-like series of summer lectures and discussions of philosophy in Concord, Massachusetts from 1879 to 1888.

Starting the Concord School of Philosophy had long been a goal of founder Amos Bronson Alcott and others in the Transcendental movement. The school was based partly on Plato's Academy. Many of the school's lectures and readings focused on reminiscences of the Transcendentalists: Ralph Waldo Emerson attended some of the school's meetings before his death, and was commemorated after; readings from Henry David Thoreau's then-unpublished journals were among the most popular events.

This school is fascinating in the way that it, precisely like Plato´s academy, was spoiled by sophists (evolutionists), and eventually was closed as a result. In his brilliant book American Gurus – From Transcendentalism to New Age Religion, Arthur Versluis writes:

Broadly speaking, there were two primary streams of thought that emerged from American Transcendentalism and, in particular, from Emerson and Alcott. One was the development of distinctively American forms of Platonism, fostered by the Concord School and its consistent inclusion of Platonic subjects. The other was what became known as “New Thought,” later becoming New Age, which Catherine Albanese termed “American metaphysical religion.” The New Age will be part of the context for our final chapters in this book, whereas we must turn now to consider a very different creature, American Platonism as it engaged in battle with materialism and evolutionism (page 55).

I seriously think that evolutionism is a sign of the decline of wisdom and therefore philosophy (a sign of the Kali Yuga).

In connection with the British Royal House it is important to know that Prince Charles is a reader, and practitioner, of the spiritual, and deeply philosophical, magazine Sacred Web. This magazine belongs to the traditionalist school. Prince Charles is namely more of a thinker than most people know, or wants to know. This in itself devalues a lot of the caricatures being created of him.

So, now I have given some clues to why I find the interview interesting in relation to the Godgame. In comments to the below links I will explain further.

A Critique of Oprah Winfrey

The 17 lies Piers Morgan claims Meghan Markle told in Oprah interview (this article is what you call the “concrete appearances” of the interview. Piers Morgan has blasted Meghan Markle for 17 “untrue, exaggerated or unprovable” slurs against the Royal Family. The TV firebrand hit out at the “delusional duchess”, weeks after he walked away from hosting Good Morning Britain over his refusal to apologise for disbelieving her. In an explosive chat on US TV, Piers defended the royals – and said a total of 17 of the claims made in the interview are either untrue, inflated or impossible to prove. These include Meghan wrongly claiming she and Harry were married in secret by the Archbishop of Canterbury and alleging that Archie was not allowed to be a Prince because of his skin colour. In his own tell-all chat, Piers told Fox News host Tucker Carlson a “woke cancel culture mob” drove him out of his morning job with ITV. Piers, 56, said: “She’s a delusional actress who wants to make millions off the royals while trashing the family.” Also see: Woke (Wikipedia), and Cancel Culture (Wikipedia)).

Meghan Markle said this spiritual hack made her much ‘happier’, by Marie Claire (This article is about Meghan Markle’s old lifestyle blog The Tig. It was one of the most wholesome places on the internet before it shut down: a little peaceful place she used to share interviews with inspiring women, her favourite recipes and – as we’ve recently discovered – one of her secrets to happiness. An old post of hers was uncovered in which she revealed she had met a ‘mystical man’ called "Light". He introduced her to something called Vedic Meditation and it changed her life. Also known as transcendental meditation, there’s a number of other celebs who are big fans as well including Katy Perry, Hugh Jackman and Oprah Winfrey! You can still read the 2015 post here).

Light Watkins (the website of the mystical man Meghan Markle talks about. It says that he “is recognized as one of the World’s Top Meditation Teachers and one of the most relatable thought leaders in the wellness space”. Thought Leader! Notice that expression. Suddenly a picture begins to form. Thought leaders comes from the New Thought movement where the mantra “Fake it Till You Make It” is central. He claims he is “re-thinking mindfulness”, and the word “success” is central in his teaching. In other words: he combines mindfulness with Western Coaching. In that connection, see my article: Mindfulness and the Loss of Philosophy. And, as a bit deeper introduction to the American cultural appropriation of Vedic meditation: see my ebook: The Tragic New Age Confusion of Eastern Enlightenment and Western Subjective Idealism. If you look at Light Watkins`s Instagram profile, you can see he has an enormous amount of followers, among them Shaman Durek):

“Shaman Durek”: Yet Another American New Thought Missionary (a Critique) – (Shaman Durek is also an LA based “thought leader” concentrating on the rich and famous. Like Meghan Markle, Shaman Durek is also involved in the European Royal Houses. His girlfriend is Princess Märtha Louise, the daughter of Norway’s current monarch, Harald V., This article gives a good idea of New Thought, and especially the concept of “Fake It Till You Make It”. Shaman Durek is by the way known for calling his workshops, “Wokeshops”. The New Thought movement and the "Fake It Till You Make It" concept is also the "philosophy" Donald Trump follows, however, on the other end of the political scale - read more here: Donald Trump: a Master Practitioner of the New Trend in Psychology: Positive Thinking).