A Critique of Tony Robbins and His Mishmash of Management Theory, Psychotherapy and Spirituality 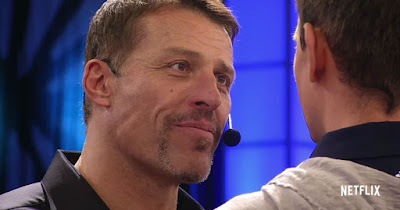 TONY ROBBINS: I AM NOT YOUR GURU, a feature documentary film about internationally renowned life and business strategist Tony Robbins, is a revelatory cinéma vérité film that goes behind the scenes of his mammoth seminar "Date With Destiny," attended by over 2,500 people in Boca Raton, Florida, each year, to give an insider look at how one man can affect millions. Granted never before seen access to the behind the scenes modus operandi of this enormous event, this film captures both the immense effort of producing this live seminar, as well as the life-changing transformations of the participants in real time. Embedding with Tony Robbins and his team over the course of six days, Academy Award nominated filmmaker Joe Berlinger turns an unflinching eye on Tony Robbins' powerful and uncompromising approach to achieving success, ensuring the attendees leave "Date With Destiny" with new perspective on the forces, thoughts, and feelings that motivate their behavior and help them take control of their lives. Pulling back the curtain on Tony Robbins, a man that traverses the globe and counsels over 200,000 people annually, including world leaders, pundits, entrepreneurs, CEOs, athletes and celebrities, through interviews and unprecedented access, TONY ROBBINS: I AM NOT YOUR GURU is an emotional tour de force that unveils the inner-workings of this mega event, the zealous participants and the man himself.

There is especially one scene where I had enough. Sometimes this turbo-powered version of “Dear Abby” can seem misguided, as when he bullies a woman uncertain about a relationship into breaking up with her boyfriend by phone at that very moment. (Understandably, he hangs up on her, and a postscript reveals that they worked out staying together after all.)

In “Tony Robbins: I Am Not Your Guru,” an immersive look at his 2014 seminar in Boca Raton, Fla., so much is lobbed that this almost fawning documentary plays at times like a horror movie. There is something almost vampiric about this public siphoning of hurt, from the self-loathing of a suicidal young man to the devastating anguish of a woman who survived a childhood of sex slavery. Is she on the road to being healed, we wonder, or has she just exchanged one possible cult for another?

“I’m gonna show you what to do to reshape yourself,” Mr. Robbins tells the young man, and more than 2,000 pairs of ears prick up. This is what they have come from all over the world, and paid almost $5,000, to learn; and like a carefully honed combination of Elmer Gantry, Dr. Phil and David Copperfield (when Mr. Robbins yanks back the curtain, it’s your deepest psychological wound that’s revealed), their host will not disappoint.

I have written about Tony Robbins before, in my article:

Reviews of the documentary:

Review: ‘Tony Robbins: I Am Not Your Guru’ Depicts a Self-Help Prophet (New York Times)

Management Theory and the Self-help Industry

A Critique of Self-help and The Mythology of Authenticity (describes how religion and philosophy have been reduced to psychology, and how the traditional cyclic being has been changed into a linear “becoming” – inspired by, for example, Nietzsche).

A Critique of Coaching (in the end of this article, I mention the Danish psychologist Nina Østby Sæther, who, in an article in the book Sevrealisering (page 89ff), writes, that the ideal about the Ego-unfolding human being shows ifself, in a remarkable way, to remind about the actual behaviour of the so-called psychopath. The resemblance steps forward by comparing the characteristic psychopathic traits with the typical attitude to life, which is introduced by the management theorists and the coaching industry)

A Critique of Cathartic Psychotherapies (gives an insight in the background for Tony Robbins´s "philosophy": Attack therapy, or Confrontational therapy).

Lucifer Morningstar - a Philosophical Love Story (free ebook. in the chapter called "Spiritual Vampires" - which the above quote from New York Times also mentions - I give a further description of the attack therapies, which grew out of American centers such as Esalen, and other "human potential" centers, as for example EST).

A Critique of the Indian Oneness Movement and Its Use of Western Success Coaching (in the documentary we see how Tony Robbins sits in a classical meditation position. According to the Oneness Movement, which he totally transformed into a his own Western Self-help theme, he is a fully enlightened master - a good story and a use of the thought distortion "Truth by Authority" - see my ebook: A Dictionary of Thought Distortions).