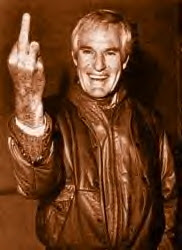 Timothy Leary is called a ”high priest of LSD” and a ”psychedelic shaman”. He believed that LSD showed potential for therapeutic use in psychiatry. He used LSD himself and developed a philosophy of mind expansion and personal truth through LSD. After leaving Harvard, he continued to publicly promote the use of psychedelic drugs and became a well-known figure of the counterculture of the 1960s, and therefore also in New Age. He popularized catchphrases that promoted his philosophy, such as "turn on, tune in, drop out", "set and setting", and "think for yourself and question authority". He also wrote and spoke frequently about transhumanist concepts involving space migration, intelligence increase, and life extension (SMI²LE). Below you can download his book:


Before my critique of Leary, I will emphasize, how much he also has been an inspiration to me. On my page, What is Primordial Meditation?, you can find five spiritual exercises. The third exercise is called Critical Thinking. Critical thinking (kritikos) has to do with three virtues: A) refutation of sophisms (elenchos), B) discrimination (the ability to discriminate between reality and illusion, good and evil, true and false - emphilotekhnein), and C) flexible thinking (learning to see, or rather, think about, things "from above", from alternative viewpoints, and, when doing this, focusing your thoughts on Beauty, Goodness and Truth).

The interplay between the three virtues ensures the balance between logic and imagination, rational and irrational, philosophy and poetry/storytelling.

My article, Storytelling as a Spiritual Practice, is basically about this third virtue. It is also the virtue I lived entirely after in my "Dharma Bum" period (which I, with the above-mentioned other virtues, still live after).

As I tell in my article, My Life as a Vagabond, both Leary and Robert Anton Wilson has been an inspiration in this way of life, and I still find his anarchistic and rebellious writings valuable (for Robert Anton Wilson, see my article: Final Secret of the Illuminati). With inspiration from Karen Blixen, I have called such a life a "Luciferian Movement" (see my Ebooks, Lucifer Morningstar - a Philosophical Love Story, and Karen Blixen - The Devil´s Mistress). These books can be seen as provocative "counter-stories" to Leary´s and Wilson´s flirtation with the left-hand path (chaos magic). In my Ebook, Philosophical Counseling with Tolkien, I show how Tolkien is supplying us with a counter-magic to our days chaos magic and technological magic. It is quite rebellious and anarchistic, and could therefore be seen as an example of Karen Blixen´s “Luciferian Movement”.

But Leary´s entirely irrational approach supplied me with the justifications which led to, that my own "Dharma bum" period ended with alcohol abuse and a liver disease.

But, I´m in fact still living after some of the old principles, which I will give a view of in this article. They namely have an ability of, either breaking up thought patterns which make you live in one “tunnel reality”, or shifting between different tunnel realities in order not to be caught up in a stagnated way of life. But it must be balanced through rationality (elenchos, the art of refuting sohisms) and discrimination between subject (dream) and object (reality). The latter doesn´t hinder enchantment. On the contrary. If you take Tolkien´s and Plato´s objective idealism (instead of Leary´s, Wilson´s, or Jung´s subjective idealism), it namely means, that when reality (or the Wholeness) through spiritual practice begins to dream, then the flowering enchantment precisely is characterized by, that it is real and not a product of your own fantasy. Tolkien always said that he didn´t construct Middle-earth, he discovered it.

Leary´s problem is his method in itself, which is based on scientific reductionism, relativism and subjectivism. This is my main objection. It is not so much the content of his books as it is his method. This method contains the propaganda technique of Leary, which borders to gaslightning in its surrealism.

It is self-refuting and self-contradictory. Let´s look at it.

Info-Psychology: A Manual for the Use of the Human Nervous System According to the Instructions of the Manufacturers, and a Navigational Guide for Piloting the Evolution of the Human Individual.

In this book you can find his eight-circuit model of consciousness which he developed in his book Exo-Psychology (1977). He gave lectures, occasionally billing himself as a "performing philosopher".

The Eight-Circuit Model of Consciousness was later expanded on by Robert Anton Wilson and Antero Alli. It  "suggested eight periods [circuits] and twenty-four stages of neurological evolution". The eight circuits, or eight "brains" as referred by other authors, operate within the human nervous system, each corresponding to its own imprint and direct experience of reality. Leary and Alli include three stages for each circuit that details developmental points for each level of consciousness.

The first four circuits deal with life on earth, and survival of the species. The last four circuits are post-terrestrial, and deal with the evolution of the species, altered states of consciousness, enlightenment, mystical experiences, psychedelic states of mind, and psychic abilities. The proposal suggests that these altered states of consciousness are recently realized, but not widely utilized. Leary describes the first four as "larval circuits", necessary for surviving and functioning in a terrestrial human society, and proposed that the post terrestrial circuits will be useful for future humans who, through a predetermined script, continue to act on their urge to migrate to outer space and live extra-terrestrially. Leary, Wilson, and Alli have written about the idea in depth, and have explored and attempted to define how each circuit operates, both in the lives of individual people and in societies and civilization. The term "circuit" is equated to a metaphor of the brain being computer hardware, and that the wiring of the brain as circuitry. In other words: the brain is pre-programmed by some kind of plan in evolution.

Leary uses the eight circuits along with recapitulation theory to explain the evolution of the human species, the personal development of an individual, and the biological evolution of all life.

Leary can best be described as belonging to what I call atheist spirituality, or transhumanist spirituality, as described in my booklet, A Critique of the Simulation Theory and the Rise of Digital Totalitarianism. Also see my Ebook: Evolutionism – The Red Thread in the Matrix Conspiracy. for a complete description of the development towards transhumanism.

When reading all his references to philosophy and spirituality one ought to be aware that he doesn´t believe in any spiritual reality external to what the human brain itself constructs. Leary is an extreme reductionist. He is not speaking out of experiences of any external spiritual reality, but out of his own psychological constructs. He used terms like game reality and claimed that all human relationships are games, and that all views on reality are game models. Read his book The Game of Life (free download) with contributions by Robert Anton Wilson. Here life is seen as an organic computer. Also here he expresses his ideas that evolution is proceeding into pre-programmed post-human stages which will carry us off the planet. The book treats the Periodic Table as a code-message which outlines the sequence of atomic and biological evolution and as a Rosetta stone from which some philosophical meanings of enduring human symbol-systems can be deciphered. According to Leary some ordinal symbol systems which can be understood in terms of the periodic table include: The Tarot, The Zodiac, The I Ching, The Playing card deck, The Greco-Roman Olympic Pantheon, The Hebrew Alphabet. These cultural icon systems are seen as crude psycho-logical neuro-symbolic expressions by pre-scientific cultures of the model of galactic evolution which is based on the table of atomic elements. According to Leary these occult systems are proto-scientific attempts to predict the course of life on and off the planet and can be seen as neuro-cultural communication systems in which humanity symbolizes natural laws. Leary also talks about genetic agents, or intelligent agents, people with insight in all this, and ability to change the meaning of life for others. He mentions Aleister Crowley and George Guerdjieff. You just have to add concepts like genetic engineering and scientists playing God, and you have to do with outright fascism (about spirituality as a role playing game, see my booklet The Scientology Game – and the Matrix Player´s Handbook).

How, given the recent and sorry story of ideologically motivated conceptions of knowledge – Lysenkoism in Stalin´s Soviet Union, for example, or Nazi critiques of “Jewish science” – could it again have become acceptable to behave in this way? Very simple because of the standards of education in America. Americans are only educated in American history, and is more less ignorant about the history outside America. Leary puts up a typical ideological black and white image: There is a Judeo-Christian plot to deny evolution. This plot is described as creationism, so that we have evolutionism versus creationism. But this is a false dichotomy existing only in America. As of 2006, most Christians around the world accepted evolution as the most likely explanation for the origins of species, and did not take a literal view of the Genesis creation myth (but hopefully not Leary´s evolutionary myth either, though popular culture is pointing in that direction). The United States is an exception where belief in religious fundamentalism is much more likely to affect attitudes towards evolution than it is for believers elsewhere. Political partisanship affecting religious belief may be a factor because political partisanship in the US is highly correlated with fundamentalist thinking, unlike in Europe (atheist fundamentalism is by the way also blinded by this false dichotomy) – about ideological black and white thinking: see my article The Difference Between Philosophical Education and  Ideological Education.

On Leary´s advocacy of psychedelics in connection with spiritual practice: see my booklet The Psychedelic Experience versus the Mystical Experience.

If people have been confused by Leary´s reductionist theories of consciousness, which at the same time refer to spirituality, I suggest that you read my booklet Philosophy of Mind in order to get a chance to see a non-reductionist view of consciousness (before it is disappearing). Also see my Ebook The Tragic New Age Confusion of Eastern Enlightenment and Western Idealism.

Info-psychology is really, really bad philosophy, written by a psychologist who dreamed about being a philosopher instead of the philosophers. Maybe some time without psychedelics could have cleared his mind a bit. Yet it is this “philosophy” we see repeated again and again in New Age and popular culture. It is the beginning of the end.

The Beatles and Their Relation to Psychedelics

The WingMakers Project (an American New Age mythology, which seems to be cut out of Leary´s formula)