My Friend in the Woods 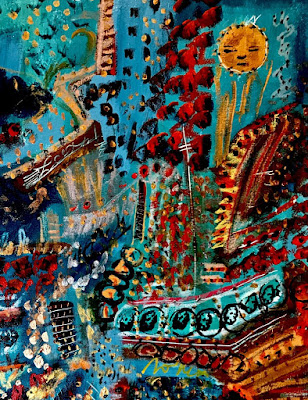 Down By the River They Pray. Acrylic on canvas, 11x9

my friend lives in the deep woods
she follows the white moon
streams, sleeps in the cloud mists.

My Friend, by Just a Tourist

In 1990 Sangchen Tsomo walked away from the brick a brack world of conventional world job, family, politics, entertainments, internet and wandered into the woods to live a life of retreat as a Tantric Buddhist yogini. She spent the next 20 years accomplishing every stage and method of the Tantric path.

What Sangchen practices is what I call Inner Tantra.

Inner Tantra means the processes that unfold between conscious energy polarities within one person's personality system. These inner tantric processes consist of a combination of energy and meditative exercises, spontaneous events, and experiences of the most intense character that encompass both energy states, love states and states of extended and higher consciousness.

However, inner tantra can also be developed in a single living human being for one reason or another. This may be due to either an involuntary interruption of a common but deep and strong love relationship; or it may be due to a conscious, often religiously determined decision to live in celibacy.

In my book Lucifer Morningstar – a Philosophical Love Story, I have described inner tantra in a concrete-existential way.

Having accomplished the goals of the path Sangchen lives like a cloud, carefree, wandering about in aesthetic spontaneity. Her magical configurations utilize cast off cigar boxes, toys, wire, found objects, paint, to create vast canvases and tiny worlds that are a dialogue between the expanse of emptiness and the magic of appearing. 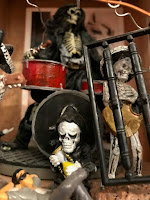 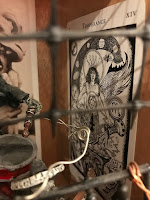 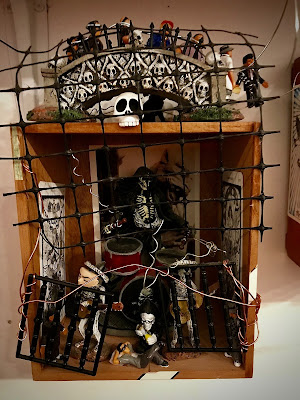 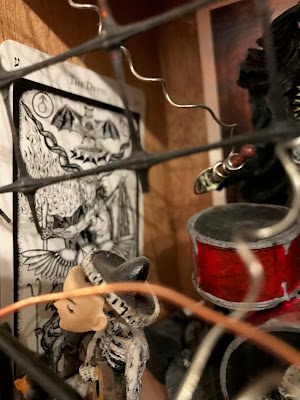 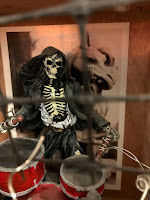 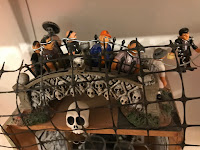 Kilometer 19, Mexico Highway 2: A sea of red on the map of death. - Magical Box 497, magics to benefit the life spirits of those dying crossing the desert in the United States.

If you would indeed behold the spirit of death, open your heart wide into the body of life. For life and death are one, even as the river and the sea are one. - Kahlil Gibran

So, in the tradition of the great female Tantric mystics like Mandarava,Yeshe Tsogyel or polymaths of European mystical history such as Hildegard of Bingen, Sangchen Tsomo is a yogini who has lived many years in solitary mountain retreat. She is a living example of profound spiritual awakening combined with being a painter, maker of magical boxes and healing amulets, master conga player and music producer. 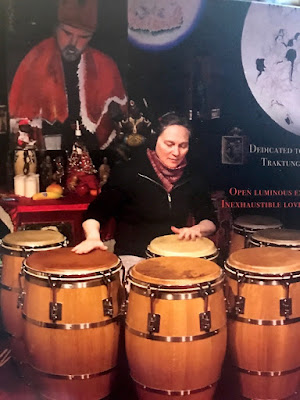 ”I have never met another being like Sangchen. Her realization, the power and mystery of her Tantric practices and abilities. She is a story from the 84 Mahasiddhas come to life in modern times." - t.k.

Sangchen´s enlightened realization and practical understanding of the Tantric Buddhist path flowered in an explosion of creativity and compassionate work to benefit beings. She does not “teach” or “have students” and lives primarily in retreat but her wisdom bliss overflows in works of art, music (she is the force behind Just a Tourist music), healing work and sorcery for the benefit and protection of beings.

Using mantra, tantra, yantra, sadhana, substances made from nature she crafts healing amulets, protection amulets, empowers sacred sites deep in the woods of West Virginia and Michigan and helps other long term solitary retreatants who have reached the completion phases of practice.

Emerging from several years of writing mantra in every free moment a secret Dakini script spontaneously emerged and Sangchen filled notebooks with secret writings. From this a style of making Magical Boxes developed and these boxes, each one a tiny magical world effectuating different intentions, are found in 9 countries and Hawaii. One day Sangchen picked up a paint brush and thus began a tremendous outflow of paintings.

The back of each of Sangchen’s paintings is blessed with diagrams of the sun or moon and/or bits of secret script and/or English.

The secret script is a form of the Dakini writing which spontaneously emerged from years of writing mantra during every free moment, between formal sessions in solitary retreat.

All of Sangchen’s art and painting are part and parcel of her Tantric spiritual work.

At the repeated requests of her Lama Sangchen has agreed to allow a Tumblr page to be created so that her art and healing work might be shared:

Nobody Daughter of No One

My Friend, by Just a Tourist:

Seiðr Shamanism and the Art of Song Healing (In this post I describe how I in my dreams began to get in contact with female spirits called Disir, very similar to Dakinis)

On the Nature of Dreams

What is a Life Artist?

What is Dream Yoga?