How Raven Spring Got It´s Name 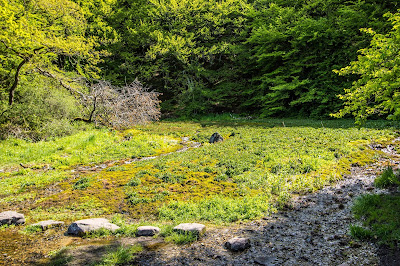 From my Forest Diary:

You can find three kinds of springs in Rold forest: 1) String-springs, 2) Pool-springs and 3) Swamp-springs (there is also a fourth kind, which is human made: the Spring Fountain, where you simply knock a thick iron pipe into the ground, and then jumps clear spring water like a fountain. This is just one of the phenomena in Rold Forest which borders to magic – if it not is magic – I will return to that in another post).


The spring you see on the above photo is a swamp-spring. It looks like the water is flowing out from the old beech wood (app. 60 litre water pr. sec.). The water flows into Lindenborg Stream.

The spring is called Ravnkilde (Raven Spring). The witch of Rold Forest, Dannie Druehyld, says that it is a “Virgin Spring”.

Dannie Druehyld once told me the following story:

“Once upon a time there lived two beautiful maidens, two sisters in Gravlev, who both loved the same man. The man loved the youngest, but the father wouldn´t allow that they had each other. He demanded that the lad should take the oldest sister.

“It became spring with May festivals, and the suitor and the youngest of the sisters ran to the forest. She came back to the father and asked, why she couldn´t have the man she loved, because now she was pregnant. But the father´s answer was no, and he couldn´t be appeased.

“The girl said that if she couldn´t have the man she loved, then the earth could have her, and she went to Gravlev bog, and sank into the mud.

“She died alright, but the earth wouldn´t have her, because her long golden hair filtered together with the branches of a tree, and they had to dig her up.

“Now they had to go to the Wise and Holy. And the Wise said that the girl was a sinner, and therefore they couldn´t bury her in consecrated earth. Instead they laid her on an oxen cart.

“The oxen knew exactly where to go with the poor girl, because they ran - as fast as oxen can run – directly into the cemetery. Now the Holy came, and they said that it was cheating, because if they had closed the gate, the oxen couldn´t get in.

“They closed the gate and tried again, and the oxen went directly to the gate, but now they couldn´t come in. They discussed what to do, and the Wise and Holy concluded that since they had two sites, named respectively Heaven and Hell, they could bury the girl exactly in between, and so they did. But such a suicide couldn´t stay in her grave. She becomes a Valravn! (a Raven of the Slain).

“There are both ravens and Valravns in Gravley Valley, and therefore the spring has the name Raven Spring. Because, you see, the spring is also a virgin spring, and here is the whole explanation of the story.

“The girl never went and sinned with the man. She just bathed “stark naked” in Raven Spring – and unfortunately, she did that under a Full Moon. Don´t do that! Because when you are bathing naked in Raven Spring when it is full moon, you´ll become pregnant, and so she did!”

The two sites, “Heaven and Hell”, still exists, and right between them lives the witch of Rold Forest, Dannie Druehyld. 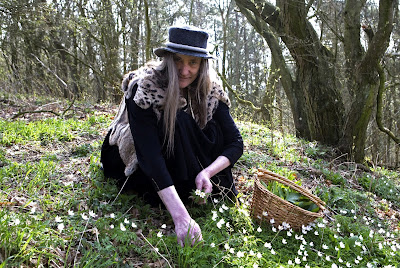 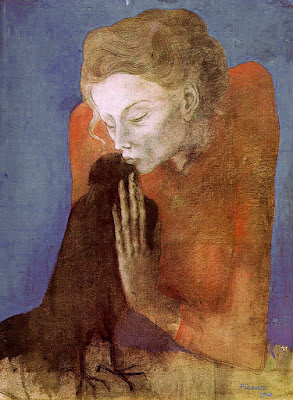 “Woman with Raven”, by Pablo Picasso