Meditation as an Art of Life - The Ancient Logos 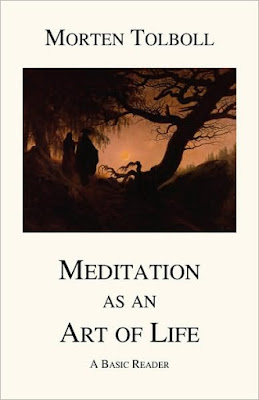 In my book A Dictionary of Thought Distortions I claim that the Sophists used thought distortions as a way of getting on in the world, while Socrates (the philosopher), used critical thinking. I consider this book to be a kind of philosophical diary on how I, during my spiritual crisis, used critical thinking (elenchos, the art of refutation) to distinguish base magic (New Age), which leaves everything to chance, and may lead its practitioners to consort with falsity and evil daemons, and higher magic or theurgy.


Theurgy describes the practice of rituals, sometimes seen as magical in nature, performed with the intention of invoking the action or evoking the presence of one or more deities, especially with the goal of achieving henosis (uniting with the divine) and perfecting oneself. Theurgy is a guarantor of truth and happiness, combined as it is with the source itself: the Good, the True and the Beautiful. Deities are symbolical representations of this source.

Critical thinking simply rescued me from madness. As a result I came to believe that Socrates represented an ancient path of wisdom, where philosophy in a similar way was used as a navigator through the Spiritual Twilight Zone. This is scholarly supported by Algis Uzdavinys, in his book Philosophy and Theurgy in the Late Antiquity.  I will return to this below, and focus on Egyptian wisdom.

Socrates´ use of elenchos involves the whole of this concept of philosophizing. His method is also called dialectic. According to Uzdavinys, Platonic dialectic is the science of purification and restoration of unity (page 65). Ancient philosophy is about creating an inner alchemical transformation of the philosopher. 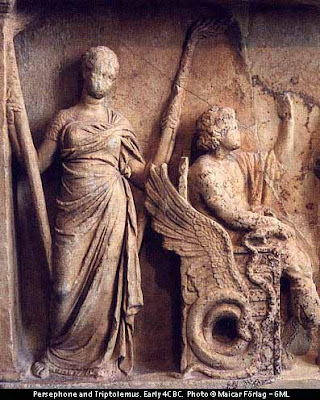 Theme from The Eleusinian Mysteries (note the reference to the Kundalini serpent, giving "wings")

As Uzdavinys says, ancient philosophy is The Ancient Logos. Hellenic philosophy is a late and "modernized" version of that immemorial wisdom tradition which can be traced back not simply to the mythical theologies of ancient Egypt, Assyria and Babylonia, but ultimately to the forgotten dreams and visions of the Stone (if not the golden) Age, whose "holy silence" is impenetrable to our modern consciousness (personally Personally, I´m quite fascinated with the “dreamtime” concept of the Australian aboriginals, and its similarity with Pythagoras´ “Music of the Spheres”, and Plato´s “World of Forms”).

Therefore Celsus, the middle Platonist, speaks about the "Ancient Logos" which is "true wisdom" (alethos logos), according to J.C.M. Van Widen´s translation. This ancient wisdom "has existed from the beginning and has always been maintained by the wisest nations and cities and wise men" (Origen Contra Celsum, 1.14), namely Egyptians, Assyrians, Indians, Persians, Odryssians, Samothracians, and Eleusinians. Evidently, both philosophy and the mysteries constitute this "true logos" which modern commentators describe as muthos. (page 70).

When my kundalini had turned into a top-down awakening (see my Ebook Karen Blixen - The Devil´s Mistress), I started writing my first book Meditation as an Art of Life - a Basic Reader. I wrote it in order to share the solutions I had developed out of distress. Today I consider it to be a legible manifestation of the Ancient Logos. At that time I wasn´t familiar with scholars like Uzdavinys, and I didn´t construct it from scholarly knowledge. I discovered it in my spiritual crisis, and in my meeting with numerous New Age occultists and magicians, who tried to mislead me with false knowledge. Had I followed their advices I wouldn´t have been here today.

Part two of the book describes five supporting exercises, ending with the philosophical diary. These supporting exercises are my Theurgy, my Dialectics. The last exercise, The Philosophical Diary, is a training in critical thinking (elenchos, discrimination). Here I present the concept of thought distortions, which are developed further in my book A Dictionary of Thought Distortions. What especially fascinated me was that my supporting exercises, The Relaxationmeditation (where I was inspired by the Savasana postion in yoga), and The Harameditation (where I was inspired by Japanese and Chinese philosophy), actually was known, and practiced, in Greco-Roman philosophy. The Relaxationmeditation was called Incubation. And the Harameditation was called Omphalos Psychism (about Incubation, see my article, Philosophy as a Rite of Rebirth (a Shamanic Ritual)).

When taken together with part one of the book, which is about philosophy (love of wisdom), the book actually can be seen as a revival of Greco-Roman philosophy, which was a genuine Western spiritual practice.

Part one of the book is about the art of asking philosophical questions in a meditative-existential way. You stop focusing on the content, and return to the form. When you for example ask the question Who Am I?, you turn yourself towards the form of consciousness and not its content. Therefore you must become silent. In that way you return to the universal, and eternal, which we all have in common. You stop heading towards the particular and impermanent. And, through all this, you can remember your own eternal, and therefore ancient, nature (this art of universal remembrance is called anamnesis). But this can only be described in religious or mythical terms.

The journey therefore seems to follow a Myth-Logos-Myth pattern. The Universe is a myth, which we travel through. In my article Paranormal Phenomena Seen in Relation to the Mystical Experience, I explain how symbols (and therefore cultural differences) have descended from universal images (Plato´s World of Forms). Symbols are therefore living powers descended from a rational divine order. In the Metaphysics chapter in my Ebook Philosophical counseling with Tolkien (page 15), I describe how the universe is created from this order (The Great Vision – the Good, the True and the Beautiful; The Ancient Logos), and from where all different religions have received their symbols in form of myths.

The philosopher (the lover of wisdom) is the person who doesn´t stop at myth, but are discriminating between myth and metaphysics. He uses philosophy (dialectics) to navigate. But the goal, to behold the Great Vision, is inexpressible, and can therefore only be described in mythical terms. AS Uzdavinys says:

The demiurgic Logos creates the universe of theophanies which is a wonder to behold, thauma idesthai, and which may be designated as a Myth in the deepest metaphysical and ontological sense [it is real]. A similar eidetic understanding of muthos is maintained by A. Lowe, to whom the universal Myth is an ontological category of the noetic level [intelligence], and to whom the Symbol is the outwardly-manifested face of the Myth.

Why may the manifested universe be called both muthos and logos? Because the totality of creation, “all things and all hieroglyphs”, to se the term of so-called Memphite theology, uttered by Thoth, by the tongue of Ptah, is able to transform the thoughts of the Heart into spoken and written language, namely, the universe. J. Assman, in this respect, observes:

“If the distinction between a sphere of original Forms (Ideas) and a world of infinitely reproduced Images is a principle of Plato´s philosophy, then the Egyptian division of creation expresses a primal, pretheoretical Platonism.” (page 74-75).

So, the philosopher returns to myth. He is a person who goes on a Hero´s Journey. In narratology and comparative mythology, the monomyth, or the hero's journey, is the common template of a broad category of tales that involve a hero who goes on an adventure, and in a decisive crisis wins a victory, and then comes home changed or transformed. It has been made popular by the mythologist Joseph Campbell.

Since philosophy and theurgy in this way are one, I often advice people to find themselves a religion, if they want to start a spiritual practice (see my article The Value of Having a Religion in a Spiritual Practice).

The ancient Egyptian religion (theurgy, texts, art and architecture) is simply a depiction of the hero´s journey. And the hero is a philosopher. This is what Uzdavinys is claiming. He writes:

The Greek word ‘philosophos’ is an equivalent or even an exact translation of the Egyptian ‘mer rekh’, “lover of knowledge”, that is, one who is in pious pursuit of gnosis, liberating wisdom, provided by Thoth and other gods for the accomplishment of transformation and spiritual resurrection in the realm of Osiris-Ra (page 15). 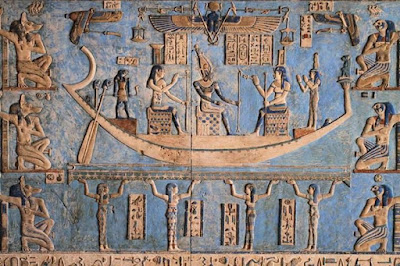 Osiris in the moon boat with Isis and Nephthys from Denderah

Now, this gives some notes for afterthought, right? This is not the story about Egyptian religion we hear in the official versions (or in the New Age pseudoarchaeological versions).

According to Indian philosophy our age is the Kali Yuga, an age of decline of wisdom. We have simply no clue about how advanced in wisdom the ancient Egyptians were. But we are incredible arrogant in the belief about how high we ourselves are on the “evolutionary” ladder.

Moreover: perhaps the ancient Egyptian culture is a reminiscence of even older ages? According to Indian philosophy, the philosophers lived on Earth millions of years ago. They lived in other Yugas, other time ages, filled with magic and enchantment. Right now, the Wholeness has fallen asleep, and therefore also wisdom. But maybe the Yugas are working in other ways, in other parts of the universe? Maybe there are other worlds out there, filled with magic and enchantment? It gives another perspective to “Close Encounters of the Third Kind”. Extraterrestrials would namely hardly come and visit us in the kind of spaceship, which science fiction writers have extrapolated from our own level of scientific development. They would probably more belong to the Fantasy genre.

Meditation as an Art of Life – a Basic Reader (free Ebook)

The Art of Pilgrimage (free booklet. Here you can find a description of the Hero´s Journey.