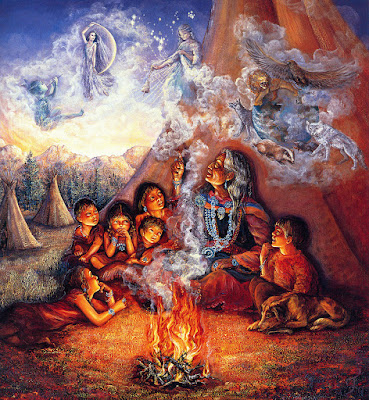 The Storyteller, by Josephine Wall

Mother Earth is a concept which witches and shamans are working with. They feel at home on Mother Earth. To get into the philosophy of Mother Earth it would be a good idea to read literature on witches and shamans. A good beginning for studying witches is Erica Jong´s wonderful book Witches. In this book you will find a lot of references to further reading on the subject, as for example Margot Adler´s book Drawing Down the Moon, and Margaret Murray´s The Witch-cult in Western Europe and The God of the Witches.

In my philosophical counseling practice I present the guest to the concept of Mother Earth, and the importance of the Earth Chakra. Mother Earth is intimately connected to poetry, mythology, fantasy and folklore. Spending time in the forest is about getting in tune with Mother Earth (Frigg) and her power. One has the opportunity to walk in beauty, and to think in beauty. Mother Earth is central for shamanism and witchcraft, and therefore also for storytelling. Storytelling is about returning to the mythic life. Storytelling is healing because it comes from Mother Earth, and is therefore widely used by shamans and witches.

The White Goddess: a Historical Grammar of Poetic Myth is a book-length essay on the nature of poetic myth-making by author and poet Robert Graves. The White Goddess represents an approach to the study of mythology from a decidedly creative and idiosyncratic perspective. Graves proposes the existence of a European deity, the "White Goddess of Birth, Love and Death", much similar to the Mother Goddess, inspired and represented by the phases of the moon, who lies behind the faces of the diverse goddesses of various European and pagan mythologies. Graves argues that "true" or "pure" poetry is inextricably linked with the ancient cult-ritual of his proposed White Goddess and of her son.

Note that I suggest the above-mentioned literature for precisely this poetic aspect of Mother Earth, and not as scholarly works.

A scholarly introduction to shamanism is Mircea Eliade´s Shamanism – Archaic Techniques of Ecstasy. My own “witchcraft teacher” is Karen Blixen, one of the most eminent storytellers of our time.

The Earth chakra is approximately one to three feet below the physical feet into the Earth.  Like the Heaven chakra, which we will discuss later, it is a gateway between the concept of the individual Self and Earth energies. Earth energy is not just simply about grounding but is very spiritual, sensual, and embodied, leading to feelings of deep rootedness, caring for the physical earth, and love for nature. A deep opening of the lower chakras occurs in conjunction with the Earth chakra opening, leading to a release of sexual inhibitions and patterns, a reclaiming of sexuality, an understanding and integration of the “dark” or shadow aspects of Self, and an ability to just be who we are, a fully sensate, sexual, physical being with complete awareness of the darkness and light we carry. A value which the movement of positive thinking is in progress of destroying. It is not surprising that the New Thought movement, from where positive thinking has its origin, originally was an American Christian movement, extremely puritanical and afraid of the dark. It is also a way of thinking which in its most extreme forms claims that reality is a mental construct, and therefore an illusion, hereunder the body. The result is a top-heavy fixation in the head, something which today seems to characterize most Westerners.

A connection to the animal or primal instincts beyond sexual also appears with this chakra – a realization of primal, deep emotions such as rage. A loss of separation between the “higher” nature of the human and the “lower” nature of the animal or Earth is achieved. We become earthly, we become wild, we understand our shadows and are comfortable working with and even playing with it. We fully understand the impermanence of our bodies. A sense of humor, a certain darkness, and a deep settling into our physical body happens through opening the Earth chakra. The ability to process larger energies and connection to larger spiritual energies of the Earth, such as the elements and elementals, can occur. It is from this depth the runes appeared, runes which are signs given to humans so that they can communicate with Mother Earth. It was therefore Odin hanged upside down on the tree of life when he received the runes. Best introductions (if following my teachings) to runic shamanism are Rune Power – The Secret Knowledge of the Wise Ones, by Kenneth Meadows and Rune Magic and Shamanism – Original Nordic Knowledge from Mother Earth, by Jörgen I. Eriksson.

When this chakra opens we no longer understand ourselves as separate, rather puritanical creatures. We are in touch with the rhythms of our bodies and the Earth. We no longer feel shame or fear around our darker instincts, and understand that dark and light are simply a continuum. There are other chakras below this that connect us to every single plant, animal, and layer of Earth. Connecting deeply to these chakras allows for us to integrate our shadows and our primal emotions. Emotions are no longer something to fear or avoid. There is an understanding that comes through that we are meant to have emotions – all of them. Rage, anger, fear, joy, happiness, sadness – they all have their own rhythm, their own flow, and are all equally beautiful. When we are fully grounded through the Earth chakra and below we can fully experience these flows of emotion, and discover that a flow of sadness may be exquisite, the flow of rage may be orgasmic, and the flow of everything that we experience as humans, both pain and pleasure, we can take responsibility for. There is no more shying away from full embodiment, our shadow, our emotions, or any part of us.

The first three chakras related to the body is about the Ego, and personal, ancestral, and family histories are stored in these chakras. Ideally we will have these chakras open first so we can deal with our own stuff before moving toward opening the upper chakras that deal with the deeper layers of conditioned reality, psychic abilities, and connection to spirit. This doesn´t happen for various reasons, mainly because working through our own stuff is difficult. As mentioned in connection with the painbody: there is a dark ancient inertia, which resists any change of our Ego. And this is precisely what New Age seems to embody in a collective form. New Age has an aversion towards preparatory work, and positive thinking´s avoidance of negativity is this dark ancient inertia put in system. It is also connected to the ideology of evolutionism, and the top-heavy Indo-European symbolism of spiritual growth seen as an evolutionary ladder. Westerners believe they are on the top of this ladder, and often believe that they can go directly to the upper chakras. It is one of the most striking illusions of the Western mind.

This has resulted in a culture of top-down awakened individuals, where the top chakras (crown and third eye) are open, but the rest of the body is not, resulting in imbalances. This culture is especially steered by the ideology of positive thinking.

James Cameron´s movie Avatar is a movie about Mother Earth. The inhabitants on the planet Pandora, the Na´vi, live a shamanic life in harmony with nature, and their divinity is a Mother Goddess called Eywa. But in the same way as Tolkien´s universe, the movie hides an ontological pluralism, that also allows a Christian interpretation. In my free Ebook Philosophical Counseling with Tolkien I have investigated this movie and both interpretations (chapter 5, Epistemology, part 3, The Peter Pan Project, and Chapter 9, Political Philosophy, part 3, The Just War Theory).

This post is an extract from my free booklet The Nine Gates of Middle-earth, which is my personal interpretation of the chakra-system.

My books on Karen Blixen:

Evolutionism – The Read Thread in the Matrix Conspiracy (free Ebook)

The Conspiracy of the Third Eye (article)